I’ve known for some time that Whistler was planning a follow-up to their product line subsequent to their Whistler Pro-68SE release at the beginning of this year’s driving season. But what I didn’t know was whether the next Whistler model was going to be a dash-mount or a remote.

I got my answer a couple of days ago, when I was informed of the imminent release of the new Whistler Pro-3600 Remote Installed Laser Radar Detector.

The new Whistler Pro-3600 will replace the Whistler Pro-3450, a remote installed detector based-upon the earlier Whistler Pro-73 platform. The Pro-3600 is based upon Whistler’s currently highest performing platform, the Pro-78SE.

Those already familiar with the the Pro-78SE platform (and its variants) or with my reviews of the same, will appreciate the performance capabilities of the new Whistler Pro-3600 Remote.

As I have yet to receive a production model with which to drive, I will cover the most salient features that the new Whistler Pro-3600 offers to those desiring to have a high-performance value-priced remote installed radar detector in their vehicle.

Compared to other remotes, Whistler’s buttons appear to be much easier to use while driving and the display easier to read from a distance. Unique to Whistler, the display/control module can be oriented either horizontally or vertically (including the text orientation), which should increase the flexibility of in-vehicle mounting. 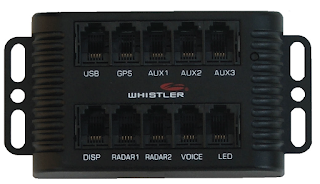 The Whistler Pro-3600 also consists of one interface module (designed to be mounted behind/under the dash), which accepts RJ11 type interface cables. Both the cables and the interface ports are labeled to facilitate easy installation.

The interface module sports three additional AUX ports to provide support for future device attachment (including 3rd party devices), possibly even an active laser jammer and will be field-updatable with a computer and a USB cable.

Another unique and very nice feature (especially for older vehicles) is the use of a cable with the incorporation of a tri-colored (red, green, orange) alert LED at its end. The alert color is user-selectable. What makes this component so interesting is that it will blink RED, when the unit/vehicle is off, making it appear like a in-vehicle security system to a potential would be thief.

With GPS capability, the 3600 can be configured to initially alert at its lowest volume setting while driving at a slower rate than a pre-selected speed. Anyone accustomed to driving around a town littered with X and K-band door openers who finds that even the delayed auto-muting can still be annoying, will appreciate Whistler’s solution. A similar speed-sensitive configuration can also be applied to the 3600’s filter modes.

Like the Whistler RLC-100 dedicated red light camera detector, the Pro-3600’s database can be easily updated with a USB-connected computer, without requiring removal from the vehicle. 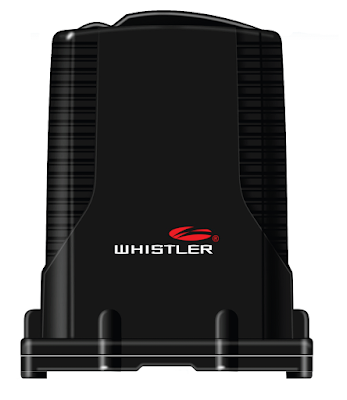 Another really compelling feature of the Whistler Pro-3600 is the ability to accept an optional rear-mounted radar antenna/laser receiver. This capability promises to provide Valentine 1-like capability in a remote, the first to my knowledge in any remote installed, regardless of price.

The Pro-3600 provides two distinct signal strength ramps, standard and fast. While both ramps are linear, the fast ramp amounts to essentially a “magnification” of the signal strength. This appears to be similar Valentine’s Ka signal-ramp custom configuration setting.

The 3600 adds an additional filter mode, bringing that total to four. Unlike a conventional city/highway mode (which Whistler still provides), these filter modes allow its user to tailor the quickness to alert (ie; the reactivity) to Ka-band. The only other detector that offers anything like this was the high-end (and out of production) Beltronics STi-R.

Like most Whistler SE models, the Pro-3600 provides Ka RSID. The Pro-3600, however, now augments the RSID display with voice prompts, as well.

Installation time, I understand, can be as little as 30 minutes. Obviously, times will vary depending on the particular vehicle and the skill-set of the installer.

Retailing at $479, the Whistler appears to have another winner on its hands with the Pro 3600 especially when one considers its PRO-78SE-like performance, that GPS capability can be added for $99, one can add a rear antenna (for what I can’t imagine being more than $149), and has the ability to integrate with 3rd party devices/systems.

Some companies pre-occupy themselves with releasing entirely new products peppered with catchy marketing phrases without offering much underlying substance.

Whistler, on the other hand, charts a different course. With each of its new product offerings, its commitment to continuously improving…to refining…to evolving is evident.

While a number of the new features mentioned above aren’t strictly performance related, when they are taken in their entirety, they result a detector that is refined, mature, and synergistic—the whole is greater than the sum of its individual parts.

I am definitely looking forward to installing this new Whistler Pro-3600 into my wife’s ‘Bru.