Speed Cameras & Photo Enforcement Cause Crashes/Accidents: The Other Side of the ‘Safety’ Campaign 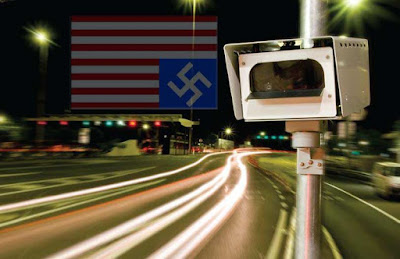 Arizona’s state government [Gov. Napolitano (D)] embarks on fulfilling the promises and profit projections made by foreign-owned speed camera operating companies, like RedFlex, by installing 40 mobile speed cameras and 60 fixed speed cameras (with the potential of another 100 speed cameras to be added later) with the intention of saturating the major east-west and north-south travel corridors of Arizona for the purposes of generating substantial revenue on the backs of the taxpaying public. 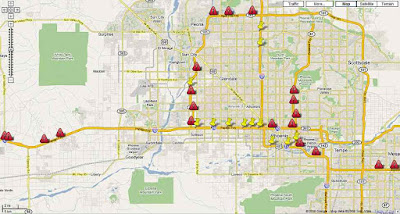 As I was driving home from the south Jersey shore area and through the City of Philadelphia (which like Phoenix, photo enforcement companies have setup shop with the anticipation of expanding their deployments of speed cameras—with the profits from their operation—throughout the rest of the state of Pennsylvania [Ed Rendell (D)]), I was giving some thought to one of the potential implications of their speed camera deployment, that has not been publicly discussed: these speed camera systems are set to grossly excessive and unfair “fines.”

For the purposes of exploring this implication, I will cite two similar circumstances, each with a vastly different outcome:

Imagine you are traveling to work (as the responsible tax-paying and productive citizen you are) from Mesa to Sun City (two cities just outside of Phoenix) and your route takes you on the highways of Interstate-10 and Loop 101. Let’s say you left at about 6am as you wanted to get a jump on rush hour traffic.

In this first example, when you are on the highway, you get into the left lane and set your cruise control to 66mph and proceed to safely travel to your destination in this manner.

Since its early enough, you find you are moving nicely along with the normal flow of traffic (which is close to the optimal 85th percentile speed of travel).

Now let’s assume that a traffic patrol officer has observed your driving for several minutes and through the course of several miles (perhaps ‘running’ your plate in anticipation of a traffic-stop) decides to cite you for speeding (unlikely, if the traffic was generally moving at similar speeds).

In this example, you’d eventually be pulled over and perhaps be given a warning or cited for speeding. The fine for your ‘indiscretion’ would probably amount to roughly $100.00, you would have been detained at least 10 minutes, and experienced an immediate deterrent from the officer to actually slow down the rest of your morning commute.

In the second example, you drive in the identical manner, but this time, there is no actual law enforcement officer there are, instead, a high density automated photo enforcement speed cameras installed along your route.

During your travel you manage to unwittingly trip 10 or more of these speed cameras strategically positioned (placed for maximum revenue) on the highway in “speed zones” where the speed limits are reduced (well below sound scientifically determined thresholds of the 85th percentile speed surveys*). *Source: individual close to speed camera industry.

In this second example, again you were moving along with the flow of traffic (which may not now be as smooth as speed cameras cause traffic porpoising) but, this time you received no immediate deterrent from ‘speeding’ from these speed cameras, for your ‘small transgression’, and you make it to work in a nice amount of time.

Several weeks later you receive 10 or more speeding tickets in your mailbox, all at one time, and amounting to more than $2,000.00!

This scenario is not far fetched, as each speed camera represents its own unique violation, even if they come within very close distances and in close time proximity.

Can you imagine getting $7,000 in “speeding tickets” for one morning or $14,000 for just one morning and evening commute to and from work?

Put another way, these unrealistically high fines would be for driving merely 11mph the posted limit of 55mph—66mph—for a single duration of about 15 minutes. Ever done that before?

Sound absurd? Don’t think it’s possible? I wouldn’t bet on it, at least in the short-term, not if Arizona Gov. Janet Napolitano and her cronies at RedFlex have their way (that’s their pipe-dream, as clearly articulated in their past annual shareholder reports).

Consider that Arizona imposes a fine, not to exceed $2,500 for a Class 1 misdemeanor*. *Source: Arizona misdemeanor fines.

It only takes one, with a reasonable level of intelligence, to see that these speed camera fine structures make no sense (but they do make a Helluva lot of money). To wit, RedFlex’s earnings rose 25% for FY ’08 and their operating profits rose an even more dramatic 45%, during the same period. (Source: RedFlex’s 2008 Annual Report) These results are even more telling when one considers that many economists agree that our economy has been in a recession and that these results do not take into account the additional revenue (ie; profits) from the statewide deployment of 100-200 new speed cameras that Arizona is just now beginning to undertake.

RedFlex’s 2008 Annual Report Excerpts (with my annotation and emphasis):

Again new records have been set, by substantial margins, in relation to all standard measures of financial performance. More specifically, record results have been achieved in terms of revenue, earnings before interest, tax, depreciation and amortisation (EBITDA), net profit before tax (NPBT) and net profit after tax (NPAT). It is particularly pleasing, and worthy of note that such record increases were achieved despite significant adverse foreign exchange conditions. Approximately 80% of the company’s business is based in the USA. Between the start and the finish of the financial year the US dollar declined in Australian dollar terms by approximately 13%. That being the case, the financial records established by Redflex are all the more commendable. Since the end of the 2007/2008 financial year, there has been a significant improvement in the foreign exchange situation, from a Redflex viewpoint at least which hopefully augurs well for the balance of the current financial year.

Whilst Redflex is clearly a high growth operation, it is pleasing to record that corporate maturity and stability continue to evolve. Encouragingly, the company’s senior management, which has served us so well, has remained in place as a committed unified team albeit with some valuable additional appointments being made in light of the company’s rapid growth. Hopefully such managerial stability will be maintained in years to come.

Nationally, the legislative environment is becoming more favourable and the overall level of political resistance is receding as the technology grows more widespread and familiar [as government desperately attempts to fill severe budget shortfalls during this recessive period]. The most likely scenario is that this trend holds in the year ahead, although reversals remain possible.

The following is a review of legislative activity in the USA over the past financial year:

The percentage of camera systems which are currently not operational as a result of legislative and legal issues has decreased to less than 5%, from around 8% last year.

So there you have it, RedFlex, in no uncertain terms, is crafting a framework to expand their operations, revenue, and profitability to other states, suggesting as Arizona goes, so does the rest of this great nation.

For them, the United State’s taxpayer is their target demographic (with the explicit enablement/encouragement by the government). Notice how RedFlex characterizes ‘threats’ [to its profitability].

It is clear that the of ultimate objective photo enforcement companies is speed camera revenue—with red light cameras (which can also be tasked as speed cameras with speed-on-green technology) as their initial foot-hold.

At a time when government is intruding more and more into our daily lives, our economy is in a free-fall, and many taxpayers may be struggling to make ends meet this is exactly what Arizona, RedFlex, and ATS intend to do: absolutely bilk, the taxpayer.

I believe eventually the public will ultimately reject these nefarious government/private business relationships and create a climate that is untenable to the would-be supporters of these corrupted relationships, but it will take time.

I, for one, am doing my part to blow the whistle on these guys (and gals) and expose them for what they truly are: economic Fascists.

Consider that certain government and private individuals connected with these systems deployment have been reported as having their own license plate registrations exempted from the fines these red light camera/speed camera systems automatically generate!!!

The sooner more people become aware of the facts and circumstances behind these ostensible ‘safety’ programs, the sooner we will rid our society of these evil and dehumanizing systems.

Faces of Evil Perpetrated for Greed: 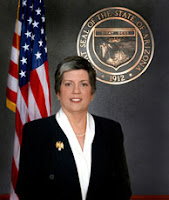 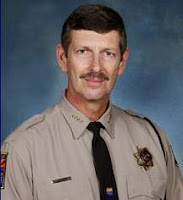 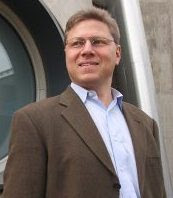 For the love of money is the root of all evil: which while some coveted after, they have erred from the faith, and pierced themselves through with many sorrows. Timothy 6:10

If you work for these organizations, consider forgoing the high salary/compensation plans and pursue a more noble path…you’ll sleep better at night.

If you don’t, please get involved, spread the word, vote the supporters out of office, pressure the media to report the real-facts and expose their fraud.

We owe it—not only to ourselves, but to our children, and to the memory of our nation’s forefathers—the kind of society we leave to/for them.

Tomorrow is the day of an historic election and will likely mark a new era of even BIGGER GOVERNMENT (regardless of the outcome).

Vote the proponents of these companies (regardless of party affiliation) OUT OF OFFICE.

Freedom is not defined by safety. Freedom is defined by the ability of citizens to live without government interference. Government cannot create a world without risks, nor would we really wish to live in such a fictional place. Only a totalitarian society would even claim absolute safety as a worthy ideal, because it would require total state control over its citizens’ lives. Ron Paul, Aug 04.