Separating the wheat from the chaff

An in-depth look at K-band filtering and signal rejection by Escort’s evolving firmware of their “fully digital” radar detectors. 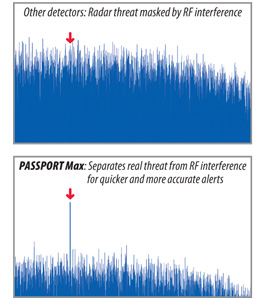 It’s no secret. I was not a fan of the Escort Passport Max when it was first introduced during the summer of 2013.  While the early hype surrounding the advanced capabilities of Escort’s new “M5 platform” appeared to be a real game changer, I found the radar detector somewhat underwhelming.  So much so, I penned a pretty escoriating review.

Looking back, perhaps I should have toned it down a bit, but coming off of the huge technological success of their M3 platform of radar detectors–like the Escort Redline and the Beltronics STi-R–expectations, for something even more dazzling, ran very high.

Since that time the RF landscape on the roadways has unfortunately and needlessly deteriorated significantly further.  The current bane of RF interference and falsing sources are no longer stationery X-band and K-band door openers–something that has plagued the radar detector community for decades–but something even more unpropitious, the advent of vehicular short-range radars (SRR).

Even though the FCC has allocated a portion of W-band centering around 76Ghz for the purposes of implementing safety features–such as collision warning, lane departure warning, lane change assistance, blind-spot detection, and pedestrian protection–the manufacturers have largely settled upon using K-band at 24.1Ghz as a means of minimizing costs relative to W-band systems.

Unfortunately, many police radar guns have been have been operating on K-band for more than three decades.  I began seeing this technology appear on the roadways and wrote about the pitfalls of this technology very early on and began documenting it nine years ago in 2007.

Being the canary in the mine-shaft, I went as far as lobbying Audi to force companies like Hella (makers of their “side-assist” systems) to shift their frequency usage (if even a little bit).  Ultimately my efforts fell on deaf ears and slowly but surely these systems proliferated.

I certainly don’t object to the technology in principle, as distracted driving (primarily by cell-phones) has reached epidemic levels (the NTSB has estimated nearly 2 million accidents were attributed to distracted driving in 2012 alone).  Since people’s behaviors are tough to control (or change), this technology may do what common sense and laws can not–reduce needless accidents.

The cause is certainly worthy enough, but for radar detector owners, its implementation certainly has not.  All is not lost though and the radar detector manufacturers have responded with new radar signal rejection and filtering technology with varying degrees of success.

All of the major manufacturers as well as some new players are implementing some form of signal rejection.  While certainly effective to some degree, they haven’t come without some adverse effects.  For example, it is not uncommon to find detection range reduced along with an increased possibility of missing instant-on police radar.

There has been one saving grace of these collision avoidance systems and that is that they use frequency modulation.  FM-CW can do what continuous waveform radar or CW radar (used by police) can not do effectively and that is measure both distance and velocity simultaneously, information critical for collision avoidance.

When Escort first announced their new Passport Max radar detector and their new digital signal processing (DSP) technology, I theorized the potential of their new technology in this article.  I believed then that it’s always been possible to analyze and differentiate between the automotive K-band radars and genuine police radar by their unique RF “signatures.”

When the Max first appeared and I thoroughly tested it, I was disappointed to find that their claims appeared unrealized.  Fast forward three years later and this is no longer the case.  I am absolutely thrilled to see that Escort (and Beltronics) are actually making good on their earlier promises.

With each new firmware release, Escort is getting better at rejecting these K-band SRRs, without significantly impacting detections to genuine police radar as was previously the case with “legacy” techniques.  So much so, in fact, that I now regard the Passport Max, Passport Max 2, Beltronics GT-7, and the Escort Max 360 to be their most compelling radar detectors as well as some of the most compelling in our entire industry.

While many still regard detection (alerting) range to be the most important performance aspect of radar detectors, I personally believe detection range to the police radars we encounter today is sufficient.  This may change if we begin to see advanced low-powered frequency hopping radar like that of MRCDs that have appeared abroad. For now, I believe effective signal rejection is the most important capability we need today and Escort and Beltronics are delivering the goods.

You may be wondering by now, how effective is their technology?  I wanted to find this out myself, so I decided to hit the roadways with two Escort Passport Max radar detectors–one with an older firmware of v1.8 and another with their most current version at this time, v1.11.

The “informal” test I devised was to sit on the shoulder of a busy highway that had a pretty consistent volume of traffic in both directions and to count the number of K-band alerts and their duration during fixed periods of five minutes each.

This amounted to a total of 20 runs of five minutes each, for a total of 100 minutes of total testing.  For me, the results became clear and one of them was unexpected.

What did I find?

If we look at the individual runs, I think it becomes apparent that indeed v1.11 firmware has made significant progress over earlier versions of the firmware.

If you look at the total combined runs, the improvements, I believe, are very clear.  Not only is there a significant reduction of the frequency of alerts, but the duration of the alerts that get through are reduced as well.  Furthermore, it appears that the Ka-band (and as later observed, X-band) “ghosting” or band mis-identifications have been essentially eliminated.

To put a quantitative spin on it, over the course of 50 minutes total, amounting to 25 minutes with each detector with version 1.8 firmware, the total number of alerts were 30 and the total duration of those alerts were 11:59 (nearly 12 minutes).  Expressed another way, the older Passport Max with v1.8 firmware alerted for a total of 48% of the total running time!

Now let’s compare those results to the detector with version 1.11 of the firmware.  Here, the total number of alerts amounted to 12 (with one series outlier).  If you eliminate that series (with the assumption that during that same time the version 1.8 firmware would have alerted significantly more in frequency), that number would likely be closer to 8.  But even with the inclusion of that series, the total duration of the alerting was 2:27 equating to an 80% reduction of alerting time.

That’s a huge reduction, and those reductions in percentage should improve further as Escort continues to identify some of the remaining systems that are slipping through.  The Chevrolet and GMC brands tend to be the culprits as far as I can tell.

Now, I’ve fielded questions from some of you as to whether the enabling of TSR would further provide alerting reductions, as one would expect.  So, I decided to invest another 50 minutes re-running the tests with TSR ON.  Interestingly enough, I was surprised with the results and for the first time more clearly suggest what one should do.

So what did I find out?

In the case of having TSR ON with both firmware versions, the outcomes were somewhat surprising and unexpected. In this case of the Max with the firmware of v1.11 with TSR ON, the actual number of alerts increased by 36% (22) over the same detector with TSR OFF (12) and the duration of alerts increased by a whopping 247% equating to 5:35 instead of 2:27.  The outcome was still better than version 1.8 of the firmware (without TSR) but apparently a step backwards from v1.11 without the use of TSR.

The results with the Max using firmware v1.8 with TSR ON, were expected, and were improved over the same detector with TSR OFF.  In this instance, the number of alerts dropped by 57% from 30 to 13 and the duration of those alerts dropped by 72% or from 12:01 to 3:20.

It’s important to note that another downside to using TSR is that it can make some alerts that get through more choppy, less linear, and more like detecting full-strength instant-on police radar.  This is similar to how the M3 series of radar detectors–like the STi-R plus and the Passport 9500ci–alert to these systems, whether TSR is on or OFF which is pretty unsettling.  Fortunately, it doesn’t always happen, but it is something to be aware of.

The use of TSR doesn’t appear to eliminate spurious Ka-band (or X-band) alerts with older firmware when encountering these systems.  The newer firmware is what you’ll need for doing that since it appears to be doing that quite well.

I say may because, although, there is a lot data collected here, it has the potential of being a coincidence and this conclusion may be premature.  Perhaps as more drivers try both settings, more information can be collected and Escort has informed me that this result is unexpected and they will look at it (I’m sending both detectors for analysis).

If you find yourself driving in areas using k-band traffic flow sensors using TSR ON may be more of a requirement.  Just be aware that you may be giving up some signal rejecting effectiveness of these K-band CAS systems in those areas, amounting to “robbing Peter to pay Paul.”

Of course, it would be nice if engineering could figure out of way of implementing TSR while maintaining similar reductions in alerting, but their job is hard enough doing what they are doing.

There is an old expression: “you can’t have your cake and eat too.”  Well in the case of Escort’s advanced fully digital signal processing, it appears now that you can.

For those interested in purchasing one of these fine radar detectors, please support RadarBusters.