Escort C65: A High Performance Radar Detector for the Masses 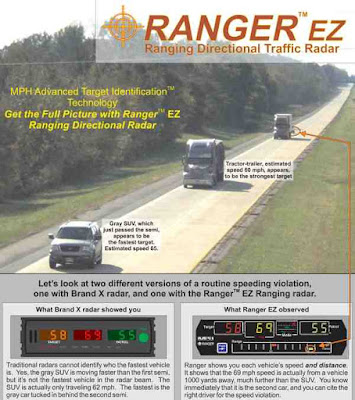 It appears that the future of police radar traffic enforcement has finally arrived with the MPH Ranger® EZ, the first police traffic radar speed measurement device capable of simultaneously measuring both the speeds of and ranges to other vehicles on the roadways.

The MPH Ranger EZ has been designed to overcome a long-standing “limitation” to police radar traffic enforcement and speed measurement—one that has since been effectively addressed by another traffic enforcement technology, police lidar. That limitation was the lack of an ability fo traffic radar to accurately identify the vehicle(s) responsible for the speed reading(s) displayed.

With conventional traffic radar on lightly to moderately traveled roads and/or at close range, this really isn’t too much of a practical limitation. However, at greater distances and/or with a higher density of traffic, this limitation may be experienced by traffic radar operators as they must carefully visually determine which vehicle(s) are actually responsible for the speed(s) displayed.

In certain targeting scenarios, the radar operator may have to make an “educated guess” and it is possible that in certain special circumstances, the wrong vehicle could be selected by the officer, meaning some hapless individual could potentially and improperly be cited for speeding.

Since operators of police lidar specifically target one vehicle before the trigger-pull, the potential for mis-identification of a speeder with laser is substantially lower at the outset.

Historically, proper training and imposed distance limitations [by the courts] served to mitigate such circumstances, but with the Ranger EZ, MPH now offers a technical solution to this radar targeting dilemma.

And while police laser provides its own compelling solution to speed measurement traffic enforcement (especially during heavier traffic densities), it has two limitations that the MPH Ranger EZ does not:

With the MPH Ranger EZ, speed measurement can be made while the patrol vehicle is either stationery or moving, of either either opposite or same direction of traffic, and provides the measurement of multiple vehicles in the radar beam path.

MPH has developed their radiolocating technology (square-wave modulated, circularly polarized CW) to be either used at the ubiquitous and relatively inexpensive to produce K-band frequency (24.05-24.25 Ghz) as well as the wider and more expensive Ka-band (33.4-36.0Ghz) , but pending ultimate FCC approval, the MPH Ranger EZ will initially be available in low power K-band at a nominal frequency of 24.125Ghz, is expected to be readily detectable by radar detectors, and uses conventional doppler shifting to determine speeds as to conform to already approved methods of traffic radar operation.

Retail pricing has been established at $2900 for a dual (front and rear) antennae system—which places in the same field of other top-of-the-line models from Kustom, Stalker, and Decatur. Unlike the Stalker DSR 2X, the Ranger EZ is designed to operate on only the front or rear antenna one at a time, but not both and should therefore be a bit easier to operate effectively.

The effective range of the ranging system has been limited to 1000 yards. Anything beyond those distances will indicate that the officer needs to get closer to the target(s) before obtaining a speed lock which can be used to issue a traffic citation. This was done intentionally to conform to emerging procedural targeting guidelines.

The approximate range to both the strongest and fastest targets is indicated by two light indicators at the lower base of the control module at 100 yards resolution, but resolution can be further increased to just 10 yards with the LED display windows. 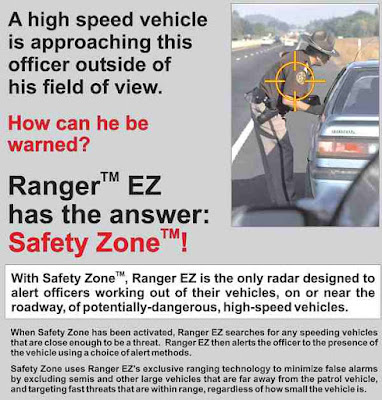 A novel safety feature afforded by the ranging ability of the MPH Ranger EZ is Officer Safety Alert™.

During a traffic stop the officer can set the unit to alert to rapidly approaching vehicles in close proximity that fail to adhere to the “Move Over, Slow Down” laws or guidelines.

If an approaching vehicle exceeds distance and speed thresholds preset by the officer, the Ranger EZ will alert with a loud and distinctive signal through the patrol vehicle’s external speaker system. This feature alone can help ensure that an officer would be less susceptible to injury or death during a routine traffic stop due to inattentive driving of passing vehicles.

I suspect this feature alone could be worth the price of admission for departments wishing to ensure the safety of their traffic patrol force, during any type of traffic or emergency assistance stops, in a world where driver distraction and inattentiveness rates are at their all time high.

The ranging and officer safety enhancing features of the Ranger EZ appear to be a much more practical and compelling alternative to the growing popularity of police laser than MPH’s POP™-enabled traffic radar units at bringing traffic radar enforcement into the 21st century.

Further reading including technical specifications of the MPH Ranger EZ can be found at the following: