As readers of my blog already know, I have been spending a lot of time discussing the growing use of automated photo enforcement systems—red light cameras and fixed/mobile speed cameras—and the negative impact these systems are having on our civil liberties and rights to privacy.

I have been focusing on this issue as now is the time to defeat the proponents of these systems before we end up like our friends across the pond in the U.K., other parts of the E.U., or like Singapore that have already resigned themselves to the widespread use of such heavy-handed mass-surveillance tactics.

The situation in our own country is about to get even worse.

Why? Because there is yet another technology that is quietly in the process of coming online and once again, Janet Napolitano’s Arizona is leading its push (along with California and New York). Why this administration is Hell-bent on creating a police state, is beyond me (and it is alarming to consider the implications of Napolitano as the next head of DHS).

Apparently there is also a push to collect and data-mine this vast amount of information for the purposes of potentially tracking the day-to-day movements of a vast amount of law-abiding citizens.

Furthermore there appears to be little in the way of formalized procedures controlling how the data collected will be used and maintained.

Beyond installation into patrol vehicles, license plate scanning/license plate recognition systems are designed to be mounted in fixed positions on overpasses to simultaneously scan multiple lanes on our highways.

Using advanced OCR software algorithms, I expect there are no technical limitations to adding this capability into existing camera/video systems such as traffic cameras and, of course, red light and speed camera photo enforcement systems—as a back-end process.

I don’t know about you, but between existing technologies—like GPS-enabled cellular phones, OnStar Navigation systems, red light cameras, and speed cameras—having yet another technology used to potentially track our day-to-day movements is troubling.

Our rights are being eroded each and every day, a little bit at a time and I continue to be surprised by our citizens’ and news media’s complicity.

At some point the “cure” is worse than the ‘disease’ and in the case of all of these dehumanizing automated photo enforcement technologies, the same can be said.

Like their cousins of automated photo enforcement, the technologies generally (but not exclusively) appear to be imported and the companies providing them, foreign-owned:

According to an automotive journalist friend of mine who recently attended the 115th Annual IACP Conference and Exposition at San Diego a couple of weeks ago, license plate recognition/license plate scanning (ALPR) systems were being marketed as the ‘next big thing’ in photo enforcement/surveillance.

Fortunately these new systems utilize infra-red imaging systems (to avoid visible flash disturbances), which means they’ve inadertently created another benefit of using Veil—anonymity—as Veil G4 can now be used to preserve and protect your privacy from their invasive nature. 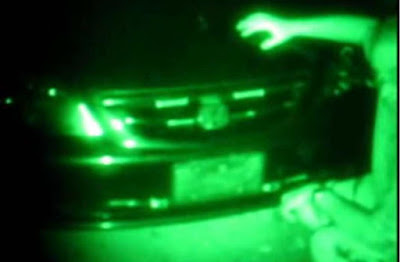 We’ll continue to monitor the growing use of this technology.

Big Brother continues to appear alive and well, but fortunately, so is American ingenuity.