I still have a first generation police laser gun from Laser Technology (LTI) in my possession, the 20-20 Marksman, introduced in the early to 1990s. It’s sheathed in metal and sports some serious optics. It’s also packs some heft to it.

At the time, it was common to see these lidar guns being operated by the Maryland State Police tripod-mounted, perhaps, in part, because it didn’t take long to experience wrist and general muscle fatigue, when hand-held, because they tended to be a bit top heavy. But, they were built like a tank. In fact, not so long ago, I had a conversation with a NJ State Trooper who was still operating one in the field because, according to the office, the later generation models, like the LTI Ultralyte, were not holding up in the field as well as these original designs.

As lidar guns have evolved over the years (now being 3rd/4th generation) from the long-established manufacturers—LTI, Kustom Signals, Stalker, and Laser Atlanta, they have tended to get smaller, lighter, and considerably less expensive than their predecessors. 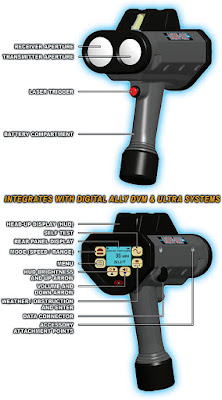 Laser Ally™: The New Kid on the Block

As with any reduction in manufacturing costs, the trend, all too often, is that quality, reliability, and perhaps even performance suffers as a consequence. A good example of this, is Kustom Signal’s Pro-Lite series of binocular-style lasers. In my experience, the earlier and more expensively built Pro-III is its superior.

Perhaps bucking this trend is DragonEye Technology and their fresh new laser gun called the Laser Ally, which was on display to the traffic enforcement community at the most recent IACP conference, in Florida, and distributed exclusively by Digital Ally.

While Kansas-based Digital Ally is certainly the new kid on the block when it comes to lidar enforcement, it wouldn’t be entirely accurate to think of the the Laser Ally as an “immature” or unproven product.

The Laser Ally is the brainchild of Scott Patterson of DragonEye Technology, LLC. Mr. Patterson has more than a decade of development experience with police lasers, having worked for Kustom Signals along with some other lidar manufacturers.

Over the years, Scott listened to the feedback from the field, collected a list of gripes or suggestions for improvement from the actual users of the different lidar guns, and used this information to develop the new generation Laser Ally police laser designed specifically for the officers and not just some generic RFP.

The appearance of the Laser Ally looks somewhat unorthodox; most notable is the handle, which pitches forward, as opposed to toward the rear or perpendicular to the chassis of other more conventionally designed lasers. This is claimed to improve balance, making it easier to target while being less fatiguing over extended periods of use. We are told by the manufacturer that this will be welcomed, especially by female officers and motorcycle patrols.

From a quality of construction stand-point, Digital Ally has asserted that while compact, the Laser Ally is structurally quite rugged, sporting an internal “floating” internal mechanism that improves accuracy and if dropped or subjected to heavy blows, the die cast, cushioned impact resistant, superimposing elements and HUD projecting display will retain its reticule aiming accuracy without requiring adjustment.

The targeting HUD features a reticule whose shape is wider than it is taller, which assists in easier and more precise targeting at a distance and provides a superior through-the-glass viewfinder experience.

With respect to it targeting abilities, the Laser Ally is capable of successfully measuring speeds through windshields (even those that are tinted) at distances greater than 500 meters (1625 feet) and, as expected, should provide superior inclement weather operation, as well.

Unique to the Laser Ally, is an obstruction mode, which allows for the elimination of stationery fixed sources of reflections, enabling accurate speed/distance measurements from cover and through obstructions that would prevent other lidar guns from obtaining speed readings.

The LaserAlly is designed to accept conventionally-sized C batteries which can also be rechargeable. This promises to be a more cost-effective alternative to proprietary battery/handle inserts of other lasers, such as the Kustom Pro III and Laser Atlanta Speed Lasers.

A very functional sleep mode only requires a single trigger-pull to “awaken” the targeting functions which will also engage the display of the last speed and distance clocking results.

The lidar unit, itself, is lighter than even the diminutive LTI Truspeed while promising to be as quick as the Truspeed in acquisition times, which I regard as one of the quickest in obtaining speed readings.

According to the Digital Ally, the unit incorporates advanced laser-jamming “proof” algorithms, which make it virtually undetectable and potentially unjammable, and is field-updateable via a USB connected PC, meaning no more having to take equipment out of service to load new firmware, threatening the efficacy of all laser jammers today and in the future.

Unlike Laser Atlanta’s optional (and for an additional fee) stealth-mode (which has been largely figured out by most radar detector/laser jammer companies), the LaserAlly’s anti-jamming function does not require a deep menu selection to enable the feature as it is a standard feature which operates by default. With the Laser Atlanta lasers, most officers were not even aware of their stealth-mode abilities or fully understood how to enable/disable their function.

Since the LaserAlly provides this capability seamlessly, it should prove to be somewhat of a headache to manufacturers and owners of laser jammers (although as a percentage of the total driving population, they are a rather minuscule amount).

As of August 2010, Digital Ally’s new lidar gun was certified for speed measurement and now appears on its approved list of lidar guns for traffic/speed enforcement.

We understand that, Digital Ally has yet to be awarded a state-wide contract, but a small number of them can be found in operation in several cities throughout North America, including Boston, Massachusetts.

The lidar unit is competitively priced, retailing at $2995USD.

Although a new comer to the laser speed enforcement market, Digital Ally appears to be offering a mature and thoughtfully designed speed measurement device that has some pedigree to it.

We are expecting to receive a unit on loan from the manufacturer and will publish an accompanying video demonstrating its use and feature set.

Time will tell if Digital Ally can sufficiently penetrate the mature laser speed enforcement marketplace. However, judging by its extensive oft user-requested feature set, ease of use, and elegant design, the prospects may be good.