I have long considered covering this extended and complex topic with my readers, but as it has been a challenging and time consuming task, especially when one considers how much reading and fact-checking is required, as such, it has taken longer than I had originally anticipated.

Nonetheless, I will attempt to do this subject matter justice, not just because of the high-degree of misinformation generally surrounding such studies (often by design of the publishers) but also because their objectives are routinely politically and/or economically motivated. 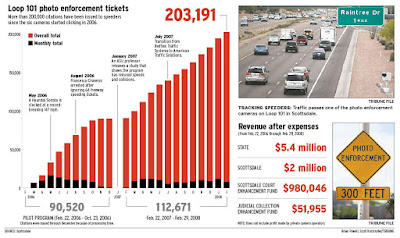 One Huge Benefit of Intelligent Transportation Systems (ie; Photo Enforcement Programs) is Money from your Pocket into Theirs.

My goal is to truthfully answer questions about the supposed safety and economic benefits raised by certain government sanctioned reports of Automated Photo Enforcement Systems (mis-labeled as Intelligent Transportation Systems).

I am going to start this series with a look at one particular “feasibility study” undertaken by RedFlex, the Arizona Department of Transportation, the City of Scottsdale, and the Department of Civil & Environmental Engineering of Arizona State University with Simon Washingtion, Ph.D (and two of his colleagues: Kangwon Shin & Ida Van Shalkwyk).

There are two reports connected with this study (formally called the SEP or Safety Enforcement Program). The first is a preliminary report which then later became the second and final report.

For the purposes of this post, I will focus on the initial report entitled, “Evaluation of the City of Scottsdale Loop 101 Photo Enforcement Demonstration Program: Draft Summary Report” which was originally dated January 11th, 2007, a report that can no longer be found online. Fortunately, we kept a copy as it originally appeared.

To appreciate the context of this preliminary/summary report and for the brief analysis that follows you should know that Scottsdale Arizona has long-served as a photo-enforcement friendly city (as does the entire state of Arizona). For more than a decade the state has served as host to two of the largest private and for-profit photo-enforcement companies, American Traffic Systems (ATS) and foreign-owned Australia-based company, Redflex.

Both of them have a rich and long history of lobbying government legislatures while at the same time forecasting explosive revenue (ie; sales) growth for both red light camera and speed camera enforcement to their investors.

It’s also important to understand that for the purposes of ADOT’s (Arizona Department of Transportation) and Scottsdale’s photo enforcement exercise (SEP evaluation), much of the underlying data used (to drive the reports’ conclusions) were provided by Redflex, the vendor financially benefiting from the program study.

For the sake of report integrity the data should have been independently measured and tabulated by those skilled-in-the-art and whom have little or no financial stake in the outcome.

This fundamental lapse of integrity is why at the core of the SEP, the subsequent reports’ findings as well those diluted summaries which followed (used to promote such systems elsewhere), the results and conclusions proferred were fatally flawed.

I’ll begin discussing/dissecting the accuracy of the preliminary report by first examining it’s initial disclaimer (emphasis is mine as is text in yellow.):

The contents of the report reflect the views of the authors who are responsible for the facts and the accuracy of the data presented herein. (This is a false claim for the underlying data was collected and presented by Redflex itself.). The contents do not necessarily reflect the official views or policies of the Arizona Department of Transportation or the Federal Highway Administration. This report does not constitute a standard, specification, or regulation. (Indeed, the “conclusions” of this preliminary report did, in fact, precipitate state-wide legislative and regulatory supporting efforts, not just those of the City of Scottsdale). Trade or manufacturers’ names which may appear herein are cited only because they are considered essential to the objectives of the report. (The objectives of Redflex and ATS were and continue to be the successful lobbying of these very same legislative and regulatory bodies for the support of their company’s products and services with huge monetary inducements[a.k.a. glorified kickbacks] in the form of what amounts to an unconstitutional tax on motorists) The U.S. Government and the State of Arizona do not endorse products or manufacturers. (This claim is entirely false, as the data provided and the objectives of the report(s) are to increase the use of RedFlex’s and/or American Traffic Solutions’ products and services).

Just in the preliminary report’s initial disclaimer, every statement was factually inaccurate.

Now compare this disclaimer to Redflex’s own “statements” in their financial report from the same period. 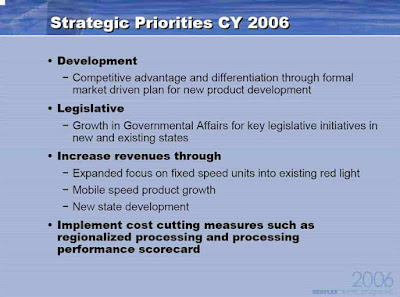 Redflex outlines a strategic plan to influence the legislative process. 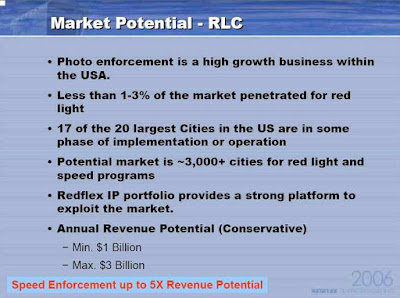 Is it coincidence that the local city which hosts their Redflex’s U.S. corporate-headquarters has undertaken such a SEP evaluation study during the same time Redflex is actively lobbying and selling their products and services? Answer: Absolutely Not. 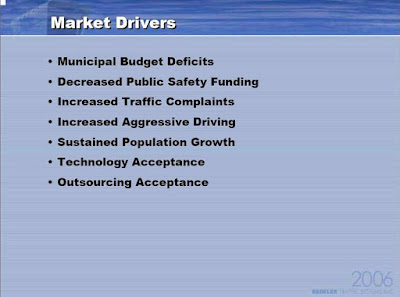 Note top two priorities are directly tied to declining operating budgets and increased deficits (ie; tax-revenue shortfalls) to see how these studies are largely economically and politically driven (ie; there’s the kickback to the politicians and the definition of their growing demographic, the U.S. taxpayer).

In future posts, I will continue dissect more of this preliminary report and the related one that followed well as the derivatives that continue to float around various government agencies and industry trade groups. When we’re finished, you’ll have a better sense about how safe these photo enforcement systems really are and what really are the underlying motivations behind their deployment, not only in Scottsdale but elsewhere, as well.