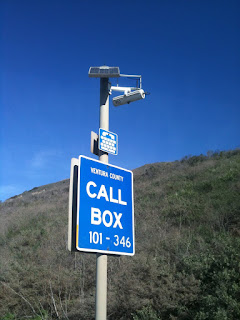 I had been planning on doing an article on Escort’s new Traffic Sensor Rejection (TSR) filtering feature—currently now available on both Escort and Beltronics radar detectors (and available as an update [for a fee] for those models that did not have it initially)— but like anything, sometimes things aren’t always a priority, that is until they become one, by happenstance.

And that’s exactly what happened to me last Sunday when, after a very long day of flying, I arrived in Los Angeles, CA and drove myself, in a rented Caddy to Ventura (about a hour north) for a business trip. For this trip I grabbed one of my V1s (to use for its superb laser sensitivity as a defense to CHP extensive use of lidar).

It was pretty late and I was quite fatigued, but cruising along nicely in the northbound lanes of Highway 101 when my V1 began alerting, at full strength, to repeated blasts of very strong instant-on (IO) K-band radar. My initial reaction, of course, was to nail my brakes, causing my large silver DTS to nose-dive precipitously. Had a vehicle been trailing behind me closely, it would have been in my front seat!

I immediately scanned my rear-view mirror for the culprit (as the alerts came from the rear), looking for the tell-tale signs of the headlights of a cruiser, while at the same time pulling out of the passing lane to the center lane. I couldn’t identify any suspicious looking vehicle, so shortly thereafter, I pulled back out in the left lane to continue my brisk progress northward.

Just as I settled back into the comfort of the driver’s seat, FULL BLAST ALERT!, again on K-band. Once again, my heart was in my throat as I feverishly searched for what clearly was a trooper waiting to pounce on me when I got my speed high-enough for a big fat juicy ticket. Again, I hunkered down in the center lane, like a good little boy, waiting (I mean praying) for the trooper to overtake me and seek out better prey.

Well, he never did and only after I was passed by a couple of small compacts, did I get the nerve to re-assert the Caddy’s V8 in the left lane.

Another FULL BLAST K-band shot! This time from the front!

I was thinking, what the heck is going on here? Did he pass me somehow? Is he driving an unmarked? I am too tired to be dealing with this nonsense…so I resigned myself to cruise at a more leisurely pace. If he’s around, I don’t care, if he hasn’t pulled me over now, I must be pretty safe.

Then again, full-blast of K-band in the front…then in the rear!

At this point, I started to think that something else was going on here. Something with a certain regularity. Something, benign.

Ahhh, that must be it! This is what it’s all about. This is why Escort introduced this new filtering capability! To filter out this extremely unsettling annoyance!

Sure enough, I started looking at the side of the highway and then I saw it! A silver-like tube mounted on a pole and facing into the direction of traffic just at the time that I received another full-blast K-band alert. 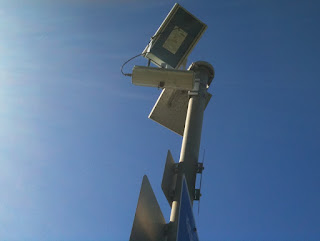 These little buggers are used by the DOT to monitor the flow of traffic on major arteries around LA (and a growing number of other cities) to identify traffic conditions in real-time.

My Lord, and I thought K-band FM modulated vehicle lane-departure systems were potentially disruptive. In their current form, these things are far worse for any one driving with a conventional radar detector. I mean, folks, here you have a benign radar-based traffic monitoring system which directly mimics the most lethal form of police radar! OUCH!

While some speed-enforcement (or perhaps detector manufacturer marketing) departments may get giddy over such a notion, I would caution them that this is not ultimately a healthy dynamic to create on busy roadways. 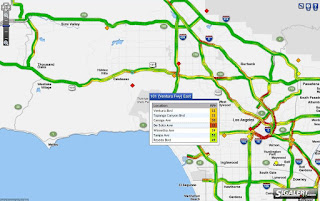 These real-time traffic sensors operate a varied intervals 24/7, ranging from an observed 15 seconds to 30 seconds, during the daytime, to upwards of one minute, in the evening, and transmit for a brief duration of about 250ms (1/4 second), according to the manufacturer.

And I couldn’t have selected a worse detector to use than the Valentine One. These traffic sensors wreak extreme havoc with the V1’s high levels of K-band sensitivity and lightning-quick responsiveness. The V1 was essentially unusable in this environment! So, I was forced to turn it off and drive the rest of the way to my hotel as if I didn’t have a radar detector with me!

Later in the week, I had a new Escort Passport 9500ix shipped directly to my hotel (from my friends at BuyRadarDectors.com) so that I could examine, in detail, the capabilities of this useful new feature (now that it’s got my attention!) so that I can share my first-hand experiences with my loyal readers and hopefully spare you the heartache that I initially experienced.

After spending a couple of days using the Passport 9500ix and comparing and contrasting it to the Valentine One when exposed to this sensor technology, I have formed some opinions that I share in the following video, actually demonstrating their respective behaviors.

Interestingly, I believe this video also effectively demonstrates the different reaction-timing philosophies of both companies that quick-trigger (QT) advocates will really appreciate.

Judging by my experiences (as documented in the video), I believe Escort is effectively “filtering out” these alerting sources, by intentionally slowing K-band responsiveness, long-enough that when this additional time-requirement is added to their underlying K-band duration-requirement, that it extends the reactivity of their detectors long-enough so that any brief traffic sensor emission is gone within the combined time-requirement, thus eliminating these spurious alerts completely.

I believe this feature is not all that dissimilar to Whistler’s long-standing user selectable filter modes, each of which, changes the responsiveness of their detectors to brief radar sources, independent of band. In this case, of course, Escort and Beltronics appear to be doing this only with K-band.

One of the upshots of this, I believe, is that their detectors can even be more quiet to relatively brief detections of K-band, which frequently come from door openers of stores adjacent to the highway, when TSR filtering is enabled.

Keep in mind, Escorts, by design, are not the quickest at validating K-band sources to begin with (that in part, contributes to them being less-prone to falsing than, say, a V1 or a segmented STi-R with RDR OFF).

Even without TSR filtering enabled, the duration of the traffic sensors’ K-band transmissions appear close enough to the Escort’s minimum validating time requirements for K-band that their detectors do not consistently alert to them which, in this instance, is not necessarily a bad thing.

If my observations are correct, I would recommend when TSR is not specifically required, that you turn-off the feature, as the total combined “delay” may be long enough to put you at an increased risk to missing a bonafide brief shot of K-band when and where instant-on K-band is being deployed.

In fact, I would much prefer if Escort would allow for a single push of a button to quickly enable or disable the feature (much like city/highway modes). As it stands, one has to enter the programming modes of the detector, drill deep down into the menu system, and change the band-reception configuration. Perhaps an even better approach would be to allow for the automatic engagement/disengagement of the “filter” by GPS coordinates maintained by GPS-enabled radar detectors like the 9500ix (though this may be much harder for them to program in actual practice).

These preferences aside, in my opinion, while driving on roadways deploying traffic sensors such as these, Escort’s and Beltronics’ feature is a most welcomed new capability that can make all the difference in the world between a most-hellish or an extremely pleasurable driving experience with a very sensitive radar detector.

The choice is yours…

Update 18 JAN 11: My understanding is that as more of these systems get deployed, the manufacturer may look at ways to make them less likely to create these kinds of interference issues, a very good thing, because I feel there will be a lot of benefits to this new traffic-flow monitoring and reporting technology, especially one that is not disruptive to radar detector owners.

The good news is that Valentine Research may have their own software/firmware update in the works and it’s conceivable that existing Whistlers can be set to filter-2 mode along with POP-OFF to essentially accomplish a similar outcome!