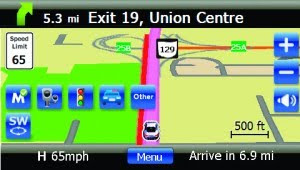 The Escort Passport iQ, appears to be similar in concept to a product (albeit, in more single streamlined chassis and with greater capability) that was briefly introduced (and then retracted) by Uniden a few years ago called MapTrax 430*, a unit that provided radar/laser detection capabilities and GPS SATNAV capabilities in conventional GPS SATNAV package. 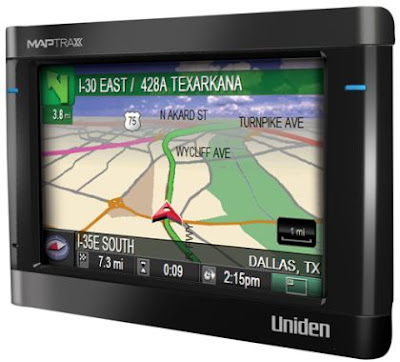 Retailing at $650, the Escort Passport iQ is $150 more than Escort’s most expensive and most advanced dash-mount radar detector, the Escort Redline. For that additional amount, the driver get’s Garmin-like GPS SATNAV functionality and access to the Trinity/Defender photo-enforcement database in one clean & integrated package. The Escort Passport iQ serves to reduce the amount of electronics that are needed on the windshield or dash.

Given the rapid proliferation of GPS-enabled smartphones with built-in navigation capabilities coupled with free traffic-enforcement phone apps like Trapster and the revolutionary RadarActive crowdsourcing system, Passport iQ may be considered somewhat redundant by smartphone owners who use these applications (of which I am one), most of which are free to download and use from iTunes.

And without the use of their most advanced M3 platform, its utility may be somewhat diminished to drivers in areas that specifically forbid the use of radar detectors, since the Passport iQ is detectable by Spectre RDDs (radar detector detectors). Even though the Passport iQ doesn’t look likes a conventional GPS navigation device, its electronic fingerprint can lead to the undesirable scrutiny of troopers using RDDs.

But, as a development platform, the iQ shows promise and I understand Escort will be releasing newer models with even greater capabilities.

Update: Escort has informed me that packaging the M3 (RDD immune) platform would be extremely difficult and cost prohibitive. Perhaps an add-on module could be made available to the Passport 9500ci platform, Escort Redline or Beltronics STi Driver/STi-R Plus RDD-immune radar detectors.

Update: Live traffic (courtesy of NAVTEQ) and Bluetooth support are coming soon ($100 premium). These are welcomed capabilities. And if you consider the potential of streaming data over a cellular network the possibilities are even more exciting.

Even more compelling would be the added ability to capitalize on the wifi hotspot/bluetooth communication abilities of smartphones, like the iPhone & ‘Droids, which could utilize existing cellular data plans without incurring additional usage costs and creating any FCC broadcast challenges. Already there is another solution that currently exists for the V1 (and soon to be others) called RadarActive which points the way to the future of Internet-connected radar detectors.

Such a design could simplify and reduce manufacturing complexities and costs while as well ensure reduced/consolidated monthly communication fees.

Collaborative networking/crowdsourcing could enable identification in real-time of locations/speed traps effectively replacing the need for apps like Trapster.

The capability could also serve to collect and data-mine known locations and false spots in a real-time collaborative fashion. Imagine rarely/never having to hear a false alert without sacrificing the performance of sensitive radar detectors.

Now THAT would REALLY be a game changer. (Update: the game has already been changed).

As this device appears to be targeted to a particular, well-heeled segment of drivers—who are looking for a hassle-free all-in-one SATNAV/detection product, Escort appears to have hit its mark—I understand it is selling quite well for them and have personally seen their POP displays at my own BMW dealership’s service department.

As is standard, we will provide a complete, thorough, and unbiased real-world review of this new detector (that won’t read like a press-release) when it becomes more generally available in production.

Further Online Discussion: Passport (Escort) iQ Review
*Note: Uniden patented the first GPS/radar detector in 1997 but then unsuccessfully attempted to market the very first integrated radar detector/GPS-enabled radar detector in the early 2000s, but the additional cost proved difficult to justify to the market at the time.