I have been an iPhone user for a good number of years now (after resisting smartphones for fear of becoming genetically attached to them). As it turned out, I lost that fear and now find the iPhone the first and last thing I touch in the morning and night (much to the chagrin of my wife!) Yes, I have become an iPhone junkie.

But one of the more fascinating iPhone/iPod/iPad applications yet to appear and available free for download on iTunes is Cobra’s new iRadar app. This application requires a hardware radar/laser detector, the iRAD-100 which communicates to the iPhone via bluetooth. That’s right, when it comes to radar/laser detection, Cobra now has an “app for that.”

In my opinion, Cobra has come up with an interesting design. With the iRadar application, one can control all major operating characteristics of their first iRadar-enabled radar detector, the iRAD-100. The iRAD-100’s settings are permanently remembered (even without the presence of the iRadar application and bluetooth syncing).

Products documentation is a bit scant, which is unfortunate given the increased complexity of user-interaction and the fact that many Cobra owners have appeared (on the road) to not have a thorough understanding on how to operate their Cobra radar detectors properly.

They include the ability to auto-mute, log detections, toggle all radar-bands (finally) including POP detection, city/highway modes, as well as detection of known photo enforcement locations, caution areas, speed traps, customized user-locations and over-speed alerts and the ability to quickly reset all of the iRad-100 settings with one push of a “button.”

The standard dashboard display on the iPhone includes real-time speed indicator in either English or metric, vehicle battery voltage, and direction traveled, as well as a button to mark a location and/or an alert (as real or false, which results in subsequent muting).

One feature of the software that I especially like is the display of all marked locations on a Google-like map which can be panned and zoomed. This capability is worth the price of admission in my opinion given that Aura is a professionally-qualified database (versus amateur markings of applications like Trapster or as downloadable custom points in standard GPS units like Garmin). Although the quality of the Aura database is generally regarded as not being as well-maintained/accurate as the class-leading Trinity/Defender database. 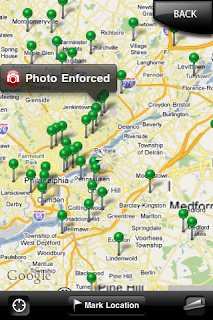 I am a bit surprised that this mapping capability is enabled (if only with proximity) without the requirement to have the iRAD-100 to be actively synced to view this valuable information, at least regionally (within a limited radius). Once connected, though, the iRAD-100 utilizes the GPS capabilities of the iPhone to provide its current location and speed in real-time.

What is even more fascinating is that the program is capable of operating without the unit altogether, providing real-time mapping, direction, and speed indications, although the GPS blue ball can stray quite a bit from its actual location. I found myself tonight driving on the adjacent stream where I don’t expect to come across any photo enforcement (at least not yet).

A dedicated GPS unit like a Garmin does a better job in this department with its higher and more stable and dedicated satellite-based GPS resolution. Also, the real-time speed indicator lags, sometimes quite a bit. I suspect this is due more to the GPS functionality of my underlying iPhone 3Gs than to the software itself. Again, dedicated satellite-based GPS units, appear to be superior in this regard, as well.

It is interesting to note that the speed indications work when walking/running or even cycling. Along with its compass the could come in handy when hiking in the wilderness. If you have an iPhone, I encourage to download the program from iTunes and try it out. It’s pretty cool.

Unlike some mis-information with some other online-blog postings, the iRAD-100 is not battery operated (which always hurts performance over actively powered units) and has included with it a nice long power cable which includes a built-in USB connection which can simultaneously power the iPhone. This eliminates the need to utilize dual-power connections.

Cobra informed me that the iRAD-100 has been favorably received in the marketplace thus far and the potential for future smartphone support (ala; Android) may be in the cards.

UPDATE 11-17-10: Cobra has announced their intention to offer a version of iRadar for Android-based smartphones early next year! Perhaps they read this article? 🙂

When I reviewed Cobra’s first GPS-enabled radar detector, years ago, my early-production model had the ability to mark locations as falses very much like the Escort Passport 9500i (which predated the Cobra). Apparently it was too much like it as Escort asserted that Cobra’s copy of Escort’s feature violated their patent. As a result, Cobra removed the feature in its firmware and no “integrated” Cobra GPS-enabled radar detector has had this capability to this day.

With the iRAD-100 and iRadar design sufficiently different from their hardware-only models, Cobra has once again offered this capability.

The current version of the iRadar application is v1.60. I would love the ability of the program to potentially be able to communicate back to the folks managing the Aura database with user location markings (over the Internet via AT&T’s Edge or 3G data network). This collaborate process would really bring radar detection into the 21st century making every other stand-alone conventional or GPS-enabled radar detector seem dated by comparison.

The ability to mark and then alert in real-time to speed-traps by other users of the iRAD-100 which are in close proximity would enable real-time advanced warning (as if one were using a CB radio on channel 19). Provided enough drivers had the iRAD-100 or simply even the iRadar application in use on their iPhones, this cooperative collaboration could potentially change speed-trap detection forever. **

Update: Their exists such a system now, primarily targeted to V1 users.

Marking locations is extremely easy and with a single push of a button from the “dashboard” display. An especially nice touch is that along with the marking of geo-data, date and time stamping also occurs and that is viewable at a touch of the red-ball that is left on the map.

Cobras haven’t historically provided the highest levels of radar detection performance. In fact, when Cobra started using the marketing phrase: “…nothing comes close to a Cobra…”, I used to think that meant radar too. Seriously though, I don’t believe this is as true today as it once was, at least with their more recent “top-of-the-line” models, as Cobra’s Ka-band and laser detection ability has improved a good bit, though still not on par with the better detectors from Beltronics/Escort, Valentine, and Whistler. However, It appears the Ka, X, and K-band detection performance noticeably lags behind them. The Cobra model may suffice for the average driver not interested in paying for a premium-priced detector, although owners of iPhones may be of the demographic group that would do so. I will get another unit from retail to confirm its performance, to compare potential model-to-model variance.

Nonetheless, I would welcome, if the iRadar application more closely integrated with the mapping functions of the iPhone natively carrying over the settings (like real-time traffic display or integration with navigation, such as the INRIX application or Google’s own real-time traffic). It would also be cool if the application could affect the mapping route to avoid the most speedtrap/photo-enforced routes, but that capability may be beyond the programability/inter-application communication of the iRadar & the iPhone’s mapping function.

For the cost of entry, this newfangled approach to radar/laser, speedtrap and photo-enforcement detection, is a compelling concept. Retailing at only $169 and with a street-price likely to below $120 (lower because of simpler manufacturing costs since there is no display on the unit itself), Cobra may have a hit on its hands. Given that the iRAD-100 has no display, Cobra enables the driver to mount the radar detector in discreet locations, as a consequence, and provides a “stealth” low profile display that is not visible by other drivers.

If and when the time comes that other smartphone platforms are supported, the potential marketplace should be even greater. I really love the idea that future updates and capabilities can simply be had by downloading newer software quickly and painlessly through iTunes without the need to send back the detector to the manufacturer or even hook it up to a computer to flash the firmware.

Until then, this Cobra model looks to be one of the more innovative designs to hit this industry.

It will be interesting to see if Beltronics, Escort, Valentine, or Whistler come up with their own smartphone-capable detector(s)—something that would be even more compelling, to be sure.

In the meantime, kudos goes to Cobra for being the first detector manufacturer in coming up with such a concept.

** For $89, the Valentine 1 already has a hardware/software solution available, introduced earlier in the Spring of 2010, called RadarActive, which basically provides this very capability including live traffic. If SignalActive, Inc. adds this same ability to other radar detectors, then we would most certainly have the potential for large data-collection, in real-time, while not being bound to purchase any particular radar detector make or model.