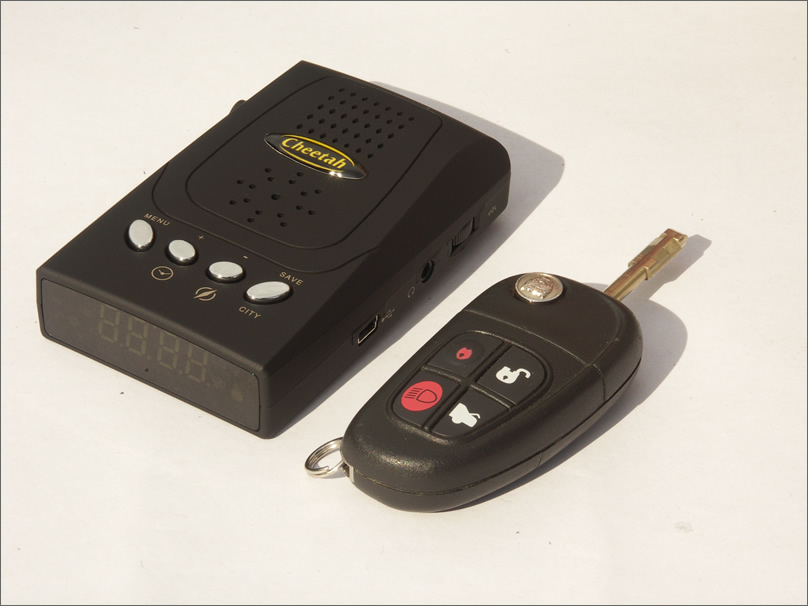 For viewers who watched Al’s recent news interview about the Cheetah GPS Mirror , you know that Cheetah hinted of a new smaller unit.

Well today, it was made official: Cheetah is further enhancing their product offering with a new smaller GPS detector (red-light camera, fixed camera, mobile speed camera) that mounts (like a radar detector) to your windshield/windscreen and provides the same performance capabilities and interfacing abilities as their Cheetah GPS Mirror.

Suggested retail for the unit is $249USD, but unlike the radar detectors from Escort/Passport (Escort 9500ix and Escort 9500ci) which offer an update subscription service (for a fee) to the Trinity Database, the Cheetah C100 includes a lifetime subscription update service as a no cost option.

This is a very compelling product offering, as the Trinity Database should be updated on Trinity Database-enabled detectors on a monthly basis due to the fluid nature of changing red light camera, fixed camera, mobile speed camera locations as greed-driven photo enforcement companies and cash-strapped municipalities routinely look to extract the most revenue out of carefully selected locations.

For frequent airport-bound travelers like myself, the new Cheetah C100 will certainly be something I will pack and use in my rental cars in unfamiliar towns.