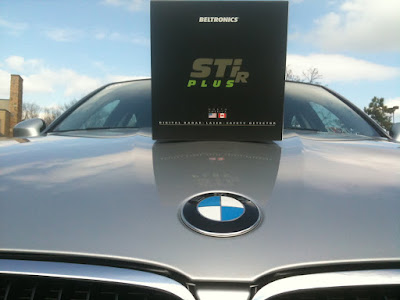 Part II of this review can be found here: Beltronics STiR Plus Review Part II

For Those Who Believe In A Second Coming

Weeks ago, Beltronics was kind enough to send me the very first production model of the Beltronics STiR Plus for an early evaluation and review, prior to its introduction to the US marketplace.

Needless to say, I was absolutely thrilled when they did so, since I have been the biggest fan of their (now discontinued) Beltronics STi-R and, I would assert, am more familiar with the operating nature of the original Beltronics STi-R than anyone else.

Those of you that have subscribed to my blog for any period of time, already know how I have felt about the Beltronics STi-R remote radar/laser detector, a detector I have relied upon up to this time and I consider it my most preferred radar detector.

It is my assertion that the Beltronics STiR Plus is the very best radar detector ever produced in the entire 30+ year history of the radar detection industry.

I would know, as I have driven with more detectors than one could possibly imagine, dating all the way back to the very first high-end (superheterodyne) detector produced, the original Escort, introduced in 1978.

This is an accolade I don’t throw around lightly, using cute semantics or similar wording to describe more than one detector, like other reviewers, who also retail multiple detectors. To me, the very best, means just that, the very best—it is a singular attribution.

Generally, I am more reserved and nuanced in my praise of any given detector. However, my extreme enthusiasm for this new remote, is warranted.

The Beltronics STi-R Plus is based on the most advanced design ever—referred to internally by the company as the M3 platform. Not only do I regard it as the most sensitive detector design ever, it is also undetectable by RDDs such as the Spectre…rendering them obsolete.

The M3 has been incorporated into three other detectors manufactured by Beltronics and Escort (which are sister companies): the first dash-mount M3 radar detector, the Beltronics STi Driver, the Escort Passport 9500ci remote radar/laser detector/jammer, and their latest high-end dash-mount from Escort, the Redline.

While all of these detectors share the M3 design, the Beltronics STiR Plus (like its predecessor, the STi-R) has the unique ability of allowing certain operations to be turned OFF. As with any über-performing design, it is often the case that less is more.

To use a car analogy, as good as the Porsche 911 Turbo has been (equate this to the Passport 9500ci), the Beltronics STi-R Plus is the Porsche GT3 RS of radar detectors.

Like any “stripped” down ultra high-performance car, performance often goes from merely spectacular to the sublime. And the Beltronics STi-R Plus is no exception. The difference, though, with the STi-R Plus, its owner has the ability to operate it in either configuration. Something that you can’t do with either of these two different cars. In other words, you can have your cake and eat it too.

Unfortunately for Beltronics (and their fans, like myself), Escort has been the brand that is generally the more widely promoted and as such, differing performance characteristics between both brands may be lost in the process. Don’t misunderstand me. The Escort Passport 9500ci is a fabulous model in its own right. But from my driver’s seat, I believe the Beltronics STi-R Plus has the ability of being even better.

I base my opinion upon having driven with both models in my vehicle for a good number of years. And, it was I, who first observed and commented about the perceivable enhanced performance levels of the Beltronics STi-R (relative to the Passport 9500ci) as a consequence of employing these advanced configuration tweaks—narrow-band Ka segmentation and RDR (detection processing/qualification) disabling.

In original STiR’s marketing literature the potential beneficial impact that these configuration tweaks could have with real-world encounters were never articulated (promoting them primarily as a means to reducing excessive Ka falsing).

Today, Beltronics does now specifically acknowledge and promote the benefits of an extremely quick-to-react and sensitive detector [to brief radar reflections or quick-triggered (QT) radar] that can still operate without excessive falsing as a consequence; and in addition, if the stationery false radar-lockout function works without flaw, this could be the holy grail of radar detection.

To be clear, I don’t believe that this new remote is actually more sensitive, per se, than any other M3-based detector including the Passport 9500ci or the Redline. I do believe it is merely quicker in alerting to brief radar signals, that theses other models also detect, but are programmed to require a longer duration and/or more qualification before actually alerting to them.

This can give the appearance to the driver that the detector is more sensitive, but technically I don’t believe this is the case and depending upon the nature of the initial encounter this behavioral difference will not always manifest itself. But, when it does, it is a beautiful thing to behold!

This is one of the reasons why my unique real-world testing and reviewing format provides insight into perceived performance variations that are not observable at staged/controlled test-runs in some remote desert. Such nuances are only observable in the real-world of driving over extended-periods of time.

Despite my very vocal proclamations of the value of these enhanced radar detection features, the sales of the STi-R in the US market were apparently not sufficient enough to prevent Beltronics from discontinuing the model. Those who did listen to my original review of the STiR and purchased one, appreciated it for the additional configuration capabilities it possessed, and some of those who didn’t, later regretted missing out when it became no longer available for purchase.

Fast forward about a good number of months (not just three days), Escort and Beltronics have finally seen the light and have resurrected the STi-R in an even more capable form as the Beltronics STiR Plus.

The Plus means that Beltronics has incorporated all of the wonderful features of the Passport 9500ci (advanced GPS functionality: auto-learning/false lock-out, red-light and speed-camera geo-alerting and computer connectivity to allow updates to its firmware and geo-coded database) while preserving the distinctive user-selectable filtering features of the original STi-R. This results in an absolute killer combination and is something I had hoped for from the beginning when both remotes were originally introduced to the US marketplace.

Even with its user-configurable responsiveness, I never found the original STiR at all punishing (like the sensitive and quick-to-react V1 can often be). But for those that may, the Plus promises to be even less so, given its new ability to permanently lockout stationery false locations, like X and K-band door openers and radar drones, automatically, something the 9500ci has had the ability to do since its introduction.

What’s more, Beltronics is offering the STi-R+ without the ZR4 laser shifters (bundled with the Passport 9500ci) at a lower price point than the ci—$1199 versus $1599 for the 9500ci, allowing its owner the option of subsequently adding the ZR4 ($449) or enabling its pairing with another laser jammer from another manufacturer of choice, if desired. *Note: Due to the devaluation of the U.S. dollar, as of May 1st, 2011, the price is expected to increase to $1299.

When you consider that the original STiR retailed at $1099, you’ll understand how much of a value the new STiR+ is now. For merely $100 more, you get the same advanced GPS capabilities of the 9500ci.

One of the developments of both Escort and Beltronics products is that over time the distinction between their models have blurred somewhat. While there are, indeed, performance differences in the varying models based upon the more widely sold conventional M4 platform detectors from both companies, the configuration of filtering changes like those of the RX-65 or the two STiR-based remotes can not be found on other Beltronics models (such as RX-65’s successor, the GX-65) and so the personality differences resulting from these different filtering mechanisms are not as pronounced as they used to be. (This same kind of thing has happened to BMW, where the current 3, 5, 6, and 7 series are not as distinctive as they have been in the past).

Therefore. I am thrilled to see that Beltronics has imbued the STi-R Plus with its unique filtering tweaking ability. Personally, I would not like to see these features appear with other Escort detectors, including the 9500ci— it’s what makes the Plus such a special detector, in my opinion, and so distinctively Beltronics. That’s the real appeal to me. To be clear, I am in no way taking anything away from the 9500ci. They both are spectacular.

Using another car analogy, think of the STi-R Plus as the Bentley to the 9500ci’s Rolls-Royce. Each superlative examples of automotive design of similar origin, but each providing a unique ownership experience.

In addition to having the combined features of the original STi-R and 9500ci, Beltronics has added another goody: quick radar deactivation, further distinguishing itself from the 9500ci. This novel feature allows its user to completely disable radar detection—restricting its function to merely red-light and speed-camera alerting.

This could be invaluable in traffic-stop situations in areas where detectors are expressly forbidden. This feature was imported from down under, where the STiR Plus has been available for some time.

As it stands now, the detection ability has to be re-enabled via software tools, which is not optimal, in my opinion, as driving on an extended trip would cause the driver to remain blind to radar until access to the computer software would be possible to re-enable radar detection.

I have suggested to management that the radar detection functionality be re-enabled by repeating the button-pressing sequence that disables it, a firmware revision for which they appeared receptive.

Another feature that I would welcome on STiR+ is the ability to tailor the alert-decay rate (for lack of a better term).

Compared to other detectors, the trailing duration of alerts (after the radar transmission has ceased) of the remotes approaches nine seconds. While I can understand the reasoning behind such a design element, I personally would prefer the ability to shorten this duration to something on the order of only two to three seconds (more along the lines of Valentine and Whistler models).

The reason for this is that I believe it would enhance the ability of the detector to communicate more precisely an approaching instant-on radar trap. As it stands now, when trailing alerts last for such long duration, I believe alert textures can often be lost in translation. By giving the driver the choice of alert-decay rates, I believe, it would further improve its utility.

At some point, I hope Beltronics considers packaging this entire feature-set into a dash-mount version—call it the STi Driver Plus. At what would have to be a higher price point (than even their halo dash-mount detector, the Escort Redline), like this new remote, it would still be the value of the century. I asked for this quite some time ago, perhaps we’re closer to this reality, now. I still believe, if you build it, people will come…

Any one considering the installation of a high-end radar detector in their vehicle would be well advised to consider the only viable alternative to the 9500ci. If you find it’s back-ordered, don’t fret. It’ll be worth the wait.

It is the greatest radar detector of all-time, bar none.

PS: I will be following up with a more thorough real-world examination as I accumulate miles and traffic radar encounters with this unit in part ii of this review.

Please show your support of the online vendor(s), who support my blog: