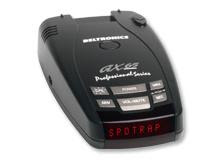 The Beltronics Pro GX65 to be somewhat of a hybrid of both the Escort Passport 9500i (which provided GPS capability and manual-marking of false and other noteworthy locations, like VASCAR speed traps) and the Escort Passport 9500ix (which adds the additional capability of autolearning fixed false locations and being able to alert to red light camera, fixed speed camera and mobile camera locations, by incorporating Cheetah’s Trinity database).

For those of us who have valued the performance of the venerable Beltronics RX65 Pro and Beltronics engineering design, the Beltronics to be a natural evolution of “conventional” (ie; non-Spectre immune) Beltronics windshield-mount radar detectors (in contrast to the Spectre undetectable Beltronics STi Driver)

When one considers the cost differential of just $30 can put you into an Escort Passport 9500ix which provides auto-learning capability along with a cool blue LED display the “positioning” seems pretty tight, quite frankly (especially when $30 historically separated models simply by the display color—red or blue—albeit in the same model line, and did not bring increased functionality).

Perhaps the positioning of this new radar detector is a precursor to the eventual phasing out of the Escort Passport 9500i which remains in the red display model version (purely speculation on my part, but I believe logical nonetheless).

Fortunately the BEL GX65 can be software updated via a PC USB cable and perhaps additional features will ultimately appear on the Pro GX65 via some future update; my vote is for the inclusion of the auto-learning feature.

At any rate, being a long-time fan of Beltronics radar detectors, I am very pleased to see the continued development of the Beltronics Pro series.

They’ll be more to come on this exciting new detector once we have accumulated some significant real real-world miles with it and documented in the following: Beltronics GX65 Review.

In the meantime, join our discussion of the new GPS-enabled Beltronics Pro GX65 and other Beltronics engineered products online.